View all reviews
View all articles
View all webinars

View the Q360 ecosystem
Voir plus

2018 has very much been a year of “epic partnerships”. The Avengers teamed up with the squad from Guardians of the Galaxy to face down Thanos. Prince Harry finally tied the knot with Meghan Markle. Even North and South Korea walked under a united banner at the Winter Olympics.Things have been no less epic on the corporate innovation front. Companies across multiple sectors have launched collaborative efforts to gather disruptive new ideas, harness new technologies, and achieve greater sustainability.

With the steady increase in competition, large corporations are more preoccupied than ever with securing data relating to the successes and failures of rivals. The conservative micro-adjustments to market changes and extensive research measures employed by large corporations has, in turn, meant that specialized startups are being increasingly sought after for their ‘predictive’ qualities.

Although careful and precise data-gathering has been a major trend, so have bold steps in the technological and environmental fronts. Corporations are increasingly looking to pioneering new technologies to increase employee engagement and expand their market base. Likewise, large-scale companies are publicizing major sustainability targets in preparation for a more eco-conscious future.

It’s important to get a sense of how the tectonic plates of the innovation landscape are shifting in order to anticipate the new opportunities of 2019. To this end, we’ve provided a rundown of five major innovation trends that continue to dominate the scene in 2018. Let’s dive in!

Large-scale companies are increasingly recognizing the enormous predictive potential offered by startups when it comes to anticipating disruption and ‘previewing’ the results of particular business ventures. This is largely because these companies recognize that the unique challenges faced by successfully start-ups with a highly specialised focus, will be the challenges that they will likely face in the future. The emergence of SaaS platforms for the management of scouting portfolios has helped large organizations to manage and evaluate opportunities more effectively

This trend is particularly evident in the financial sector. Back in 2017, the PWC Global Fintech report found that 88% of legacy banking organizations feared that the emergence of new financial technology companies would lead to a significant loss in revenue in areas such personal loans, money transfers and payments. As a result, 82% of these organizations stated that they are undertaking steps to increase collaboration with emergent fintech companies. The sentiments were also shared by major financial service firms, 50% of which expressed a desire to harness the predictive and disruptive capabilities of fintech startups by acquiring them directly. 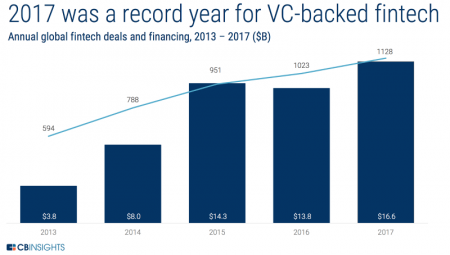 This graph from the CBINSIGHTS Fintech Trends To Watch 2018 clearly indicates a rising trend in venture capital investment in fintech companies .

Within the fintech sector and beyond, the rapid rise in startup companies worldwide – resulting largely from the growth of cloud-based applications like Amazon Web Services – will continue to result in increasingly diverse B2B partnerships, setting the tone for disruptive innovation trends well into 2019.

The ascendency of mobile-centric corporate innovation has been growing steadily in recent years. A 2016 study conducted by FierceTechExec found that 71% of workers spent over two hours a week accessing company information via mobile devices. A separate study by CareerBuilder found that 82% of workers kept their mobile devices within eye-distance at work. While the latter statistic is held up as a potential productivity-killer, it also reflects why companies are beginning to appreciate the central role mobile devices can play when it comes to innovation (particularly innovating on-the-go). 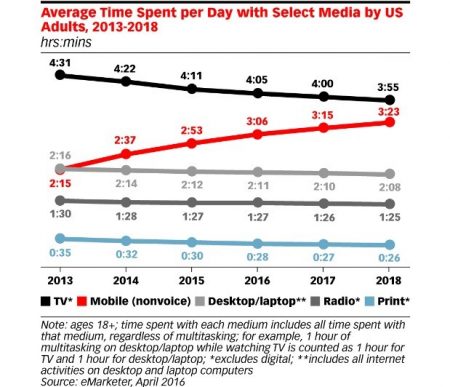 Chart from Dynamic Signal detailing the steady rise of hours spent on mobile devices compared to other mediums.

Due to the increasing centrality of mobile devices, mobile apps are playing a greater role in digital transformation strategies for large-scale enterprises. Companies are beginning to realise the enormous potential of mobile-focused ideation software. This is because mobile devices can, naturally, be readily used in the field as well as the office, giving users an easy means to contribute thoughts while on-the-go (workflow improvements, solutions to logistical problems, etc).

A major study undertaken by Constellation Research on The Strategic Impact of Mobile Transformation on Business Value found that “More than 80% of organizations recognize the impact of mobile transformation on internal and external stakeholders and have created dedicated teams to work on solutions.”

Nestlé is just one major company that has adopted the trend of focusing on mobile apps to boost employee engagement and break down departmental silos. As part of their broad scoping InGenius innovation accelerator program, the company developed an assortment of mobile apps to increase employee offers, as well as promote networking and talent-finding across virtual teams.

It’s clear that the ‘Internet of Things’ (IoT) has expanded steadily in recent years and played a growing role in shaping innovation trends. However, the growing prominence of the phygital component of this network is a fairly recent development. Only last year, numerous commentators and online publications rightly anticipated that 2018 would be the year of the phygital experience. As the name suggests, the ‘phygital’ is that which combines both digital and physical experiences to achieve a specific marketing goal. In a retail setting, it typically entails integrating brick-and-mortar store locations with an ecommerce experience (digital purchase interfaces, catalogues, etc). 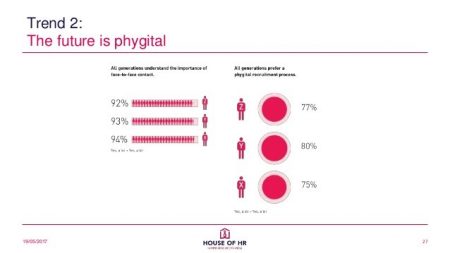 House of HR has released statistics that indicate that generations X Y and Z prefer a phygital recruitment process to a traditional face-to-face interaction.

Innovation leaders should take note of the Phygital trend for a number of reasons. For one, the implementation of Phygital technology has the potential to reshape industry training across multiple sectors. A clear example of this is augmented reality being used by employers to give staff a means of safely and efficiently interacting with simulated equipment. Boeing is just one major company to use augmented reality to streamline its wire assembly procedures. The corporate training potential of this new technology is also becoming clear, with the augmented reality industry estimated to be worth 120 billion by 2020.

Phygital advances are also being increasingly used in the luxury goods and fashion sectors to bridge the divide between customers who prefer physical and online shopping experience. Tiffany & Co, for example, has released an Engagement Ring Finder app, which allows shoppers to use the camera in their mobile device to preview how different rings will appear on their own hand.

In 2018, shoppers can locate and purchase goods with an ease unparalleled in human history. Google consumer insight researcher Natalie Zmuda rightly observed that “…people are more curious, more demanding, and more impatient. We saw evidence of this throughout 2017, and it will be critical for marketers to understand these new behaviours as they move into 2018”

Empathy mapping – i.e working collaboratively on a diagram that ‘maps out’ what customers might think, feel, say, or do in response to a marketing initiative– has long been the principle tool for anticipating key behavioural shifts. It’s also considered a primary step in the design thinking process, allowing planners to better define specific problems that can then be adequately resolved.

Due to the increasingly interconnected nature of the workplace, the standard empathy mapping approach (i.e designers brainstorming with post-it notes) is being rapidly replaced by digital methods. The steady rise of online collaboration tools makes clear that innovation managers are seeking after more efficient, manageable, and comprehensive ways to glean direct feedback from customers and/or staff. Clear examples of this can be seen in software companies, where designers are adapting empathy maps to understand user pet-hates and preferences – and adjusting their UX approach accordingly. 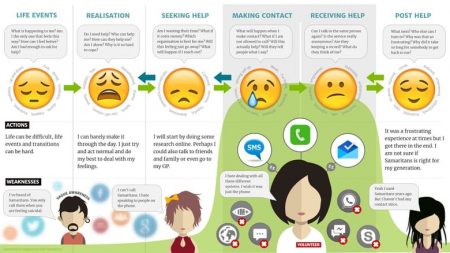 Digital Customer Journey Maps (which factors in information gleaned from empathy mapping) require regularly updated data in order to serve as a valid tool. Often times, this data can be gained through crowdsourcing projects. The above is an example of a journey map structure from boagworks.

Customer journey map models – i.e a visual representation of the interactions a customer has with an organization – are also becoming increasingly digitized, as they provide an invaluable means of assessing the weaknesses in workflows, delivery systems, and other points of interaction. An increasingly large amount of data is required for these digital journey maps to prove valid for informing innovation (including data gleaned from the empathy mapping stage). As such, innovation leaders are increasingly turning to crowdsourcing campaigns to secure this data.

It’s estimated that approximately 5.25 trillion pieces (269,000 tonnes) of plastic have found their way to the open ocean, causing massive detrimental effects to marine ecosystems worldwide. As such, it is little wonder that leading companies are amping up their sustainability efforts in preparation for a post-plastic future.

A distinctive trend of implementing biomimetic approaches – i.e looking to nature to provide solutions to design problems – has been intensifying steadily. For example, the water-resistancy of chicken-feathers and the biodegradability of milk protein have been cited as viable sources for plastic alternatives.

Ford Motor Company serves as a great example of a major corporation that has adopted an innovative, nature-inspired approach to sustainability. The Repreve seat fabric that Ford uses for their vehicles is made from fibres derived from recycled plastic bottles. This initiative has diverted just over 5 million plastic bottles from landfills.

In a world where technology now blurs the line between the physical and the digital, and where small emergent companies have the potential to break monopolies, the expression ‘innovate or die’ has never wrung truer. In fact, if there is a common theme that innovation leaders should take note of going into 2019, it’s the importance of flexibility.

While it’s as important as ever to retain a key team of innovation professionals to spearhead select projects, looking externally for new ideas and opportunities is becoming increasingly integral. In a research snapshot for emerging innovation trends in 2018, Startup Europe Partnership found that “…top European corporates have – or are planning to establish – a dedicated open innovation unit.” Online innovation management systems, such as Q-scout and Q-open, can prove invaluable for pinpointing opportunities for lucrative partnerships, as well as gathering the data essential for improving workflows.

With 2019 fast approaching, and a tempest of even more market-disrupting forecasts on the horizon, consolidating and diversifying our innovation tactics is more crucial than ever. Fortunately, by combining an overarching strategy with reliable innovation management software, adjusting to the changing climate can bring more excitement than fear.

Check out our blog covering the disruptive corporate innovation trends set to shape the business landscape in 2020.

To discover how Qmarkets can help you implement a strategy to help you anticipate these important innovation trends, don’t hesitate to schedule a demonstration with us today.

Your Source of Innovation Nourishment...

Subscribe to our newsletter to get the latest field-proven best-practices, innovation program leader tips, and expert thought leadership straight to your inbox.